North Devon is located in the south west of England. It was created in 1950, and has been held by the Liberal Democrats since 1992.

The current member of parliament is the Liberal Democrat Nick Harvey, who has served since 1992. 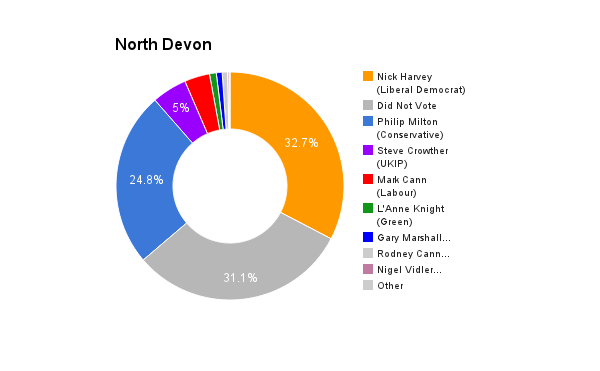 For more information, click here to visit the Wikipedia article.

My main political concerns for the North Devon constituency are renewable energy, integrated transport, sustainable agriculture, tourism and the resilient survival of the NHS and our state education system.

So, why the Green Party? One reason: without a planet, everything we aspire towards, all our hopes and aspirations, all our economic and social traumas are both vanity and pointless. There is only one party that ticks all ten of my boxes and that is the party with a Philosophical Basis that makes the hairs on the back of my head go electric. Read this: http://policy.greenparty.org.uk/core-values.html
We are the only credible alternative party to the business as usual Westminster closed shop that masquerades as democratic representative government. The so-called Big Three have presided over nearly 40 years of evolving systemic failure: economic boom/bust mayhem, financial mismanagement, casino banking melt-down, political corruption, environmental destruction, social upheaval, immoral imperialist wars and the shameful ever-widening gap between the mega-rich 1% and those in real poverty. When is enough enough?

If you have any questions or feedback, feel free to contact us using the details below.

We are a new site for 2015 aiming to revolutionise the way people in Britain vote in General Elections.

How we collect information:

We collect information such as your name and email address if you send us a message via the contact form on our website.

Google Analytics is a web analysis service provided by Google. Google utilizes the data collected to track and examine the use of www.candidatehub.co.uk, to prepare reports on its activities and share them with other Google services.

Google may use the data collected to contextualize and personalize the ads of its own advertising network.

What we do with the information that we collect:

Candidate Hub use cookies to enhance your experience. Cookies are very small text files that are stored on your computer when you visit some websites.

You can disable any cookies already stored on your computer, but these may stop our website from functioning properly.

The following are not Strictly Necessary, but are required to provide you with the best user experience and also to tell us which pages you find most interesting (anonymously).

Please note that we treat usage of our website as acceptance of cookies. You are free to block them but if you do so then we cannot guarantee that our website will be fully functional.

The following cookie is set by Candidate Hub to remember whether or not you have read and dismissed the 'cookie acknowledgement' on this website. This cookies is set to expire 365 days after it is set, ensuring the cookie acknowledgment isn't shown to you again for at least 365 days after you have dismissed it. This cookie does not store or collect any personal information.

For further information on the above mentioned Google Analytics cookies, please visit developers.google.com/analytics/resources/concepts/gaConceptsCookies

Links to other websites:

The 2015 election is now over. All information is regarding the 2015 General Election unless otherwise stated. More news to come. Follow us on Twitter to keep up to date: @Candidate_Hub